I have so many projects that NEED to be completed (1/2 started and left or bits piled somewhere waiting to start). One of my resolutions for 2011 is to GET THINGS DONE! I'm happy to say that I'm on my way... 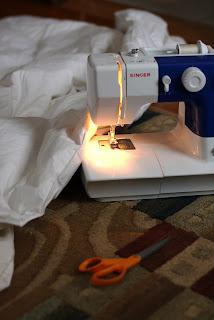 The thought for the project I'm working on today began months ago. Kevin and I have had a down comforter on our bed that I think has what is called an 'open baffle box' construction where the squares are not closed and the down can shift around. It is a great comforter but it is a pain having to shake the whole king sized thing out to redistribute the down each morning. So, we bought a wonderful new comforter that is perfect in every way. As one who attempts to be thrifty and hates to waste, I decided I could turn our old king comforter into two twin comforters for the girls' beds! We found cute duvet covers at Ikea and the covers and the scrunched king comforter have been sitting in a corner of our room for at least 6 months! This morning Kevin and I redistributed the down and I sewed two tightly stitched seams down the middle before cutting the comforter in half (with only minimal down escaping!). Now I just need to stitch all of the squares of the two comforters so the down doesn't shift, wash the comforters and covers and we'll be good to go! I'm hoping to have the comforters on the girls' beds Monday night. I'll let you know if I do it! :)
Next project: Curtains for the girls' room & dyeing bed skirts to better match the new duvet covers!
Posted by Karen at 1:59 PM

Very cool Karen! Impressive, considering (as I've shared with you before, I think) that I cannot sew even a button. :)

I loved your comment today. Yes, having an actual "valentine" makes it so much more fun, right??

What a great idea! How did they turn out?