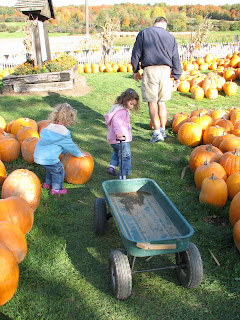 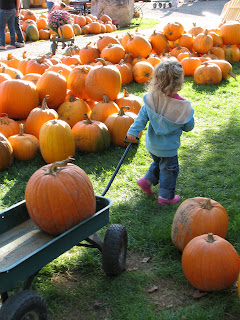 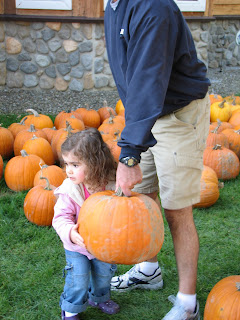 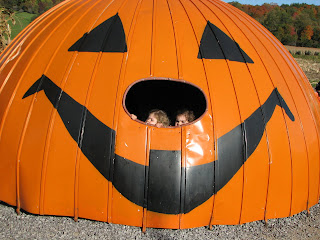 This past weekend we headed out of the city to a farm about an hour away to pick out the perfect Halloween pumpkins. It was a beautiful Indian Summer day: sunny and temps right around 70. First we went on a hayride and saw turkeys growing big and fat (100% naturally!) for Thanksgiving, fields of pumpkins and corn stalks, and maple trees storing up sugar for their season. We then picked out a wagon and found 3 BIG pumpkins that were just right for our Halloween carving. And in between all of this the girls went in and out of a big round metal building/shed that was painted like a pumpkin (the girls called it their "pumpkin house"). We all had a great time!
When it was time to leave I took the filled wagon to the van to unload while Kevin took the girls to the "pumpkin house" one last time. I opened the front door of the van, threw in my camera, bag, keys, drinks, etc. and then put the pumpkins in the back. By the time I finished unloading, my crew got to the van, Kevin left to return the wagon, and the girls started playing with the buttons on the front door. I quickly shut the front door, got "A" buckled into her carseat, shut her door and carried "O" to the other side to buckle her in. But... when I pulled the door handle it was LOCKED. I frantically tried all other doors but they were ALL LOCKED... with "A" inside, buckled into her carseat and the keys on the front seat. I thought I was going to be sick. I called to Kevin who ran back and rechecked all of the doors and closed windows while "O" and I played peek-a-boo with "A" to keep her smiling. Kevin ran back to see if anyone at the farm could help. Fortunately a man who lived .5 mile down the road had a towing business and within 5 minutes he was there with tools working to open the door. It took about 5 minutes for him to unlock the door. Although "A" was probably only locked in for a total of 15 minutes, it felt like an hour. She was a real trooper and was calm until the last 3 minutes or so, at which point she started crying and looking at me with pleading eyes and begging "get me out". Once the lock released I whipped the door open, unbuckled the carseat and hugged my little babe so tightly. I don't ever want this to happen again!
Thankfully, we were parked in the shade. Thankfully, I took "A's" sweatshirt off right before I put her in the van. If it had been a hot day I would have broken a window to get her out right away~ I was ready to do that anyway if it took much longer to unlock the door. Thankfully "A" was okay.
After we (I) calmed down we headed to a little pizza place where we had a relaxing and fun dinner and then drove home singing Peter Peter Pumpkin Eater. And now we don't have to explain how Peter fit his wife into a pumpkin shell~ "A & O" have been in one, too!
Posted by Karen at 2:12 PM No comments: