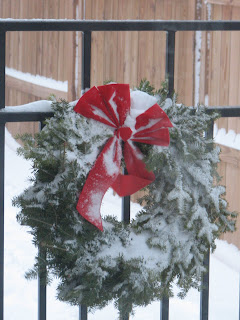 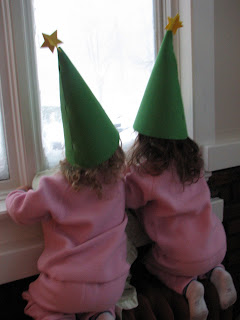 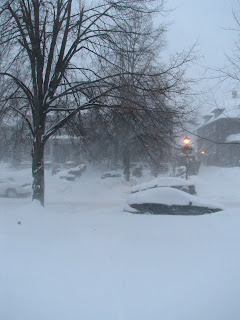 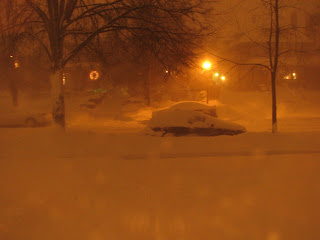 Looks like we're going to have a white Christmas! The snow started falling late Thursday and has continued. Happy Winter!!
Posted by Karen at 9:40 PM 2 comments:

As far back as I can remember Santa always wrapped my family's Christmas gifts. Christmas morning (well, maybe the first 30 minutes of it!) was spent unwrapping the mounds of gifts that were left under our tree. I remember my Mother trying to control when certain gifts were opened because she wanted to see the expression on our faces as they were opened, but we were always way too fast for her. One year we tried having each person take a turn opening a gift while everyone else watched but that lasted one WHOLE turn because what kid has that kind of patience?
A&O were 10 months old their 1st Christmas and Kevin and I debated whether Santa would wrap the gifts left under the tree. Since the girls were so little and we would probably end up doing the unwrapping, we decided to skip the paper. Besides, we had two large family parties where loads of wrapped gifts were received, unwrapped and hauled home. They weren't missing out on unwrapping!
Last year, A&O's 2nd Christmas, we decided to go really light on the number of gifts Santa brought to our home (we knew from the year before that they would be overwhelmed with gifts from family). Santa went with one big gift (this) and some books and cds. We skipped the wrap again.
So here we are, Christmas 2008. A&O are almost 3 years old and are starting to 'get' the whole Santa thing. I'm feeling as though this year will set the precedence of how Santa does things in our house. The pressure is on. Should Santa wrap the gifts he leaves under the tree? I think I'm leaning toward 'Yes'. Does Santa wrap the gifts he leaves under your tree?
Posted by Karen at 9:15 PM 2 comments:

On the first day of Christmas...

I visit Design Mom daily to get a fix of all things cool in a design kind of way. On Friday 12/12 she'll be having a Giveaway Event that you won't want to miss! Check it out. I think you'll be glad you did!
Posted by Karen at 9:51 PM 1 comment:

This past weekend we went to a holiday party at the zoo where the guest of honor was the big guy himself, Santa (& we remebered to take the camera)!! A special Thank You to Daddy for waiting in the Santa line for 1+hour while the girls and I snacked on treats and hung out in the Gorilla Habitat! 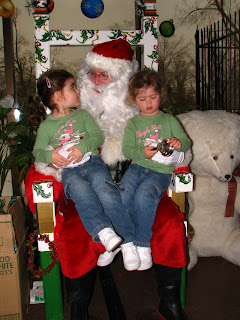 'A' seemed a little unsure here: 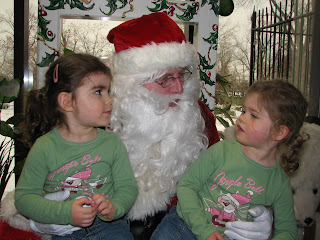 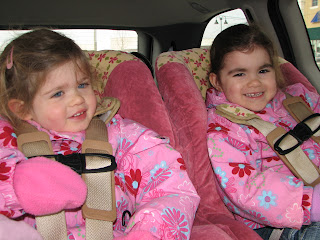 Yesterday we went to the Pediatrician for the girls' flu shots. Two nurses walked in the room to do the shots at the same time. Apparently the vaccine stings a little once in your arm and both girls started crying.
O: (while crying) "Mommy, why is 'A' crying?"
A: (while crying) "Mommy, why am I crying?"
Very cute.
Posted by Karen at 9:16 PM 1 comment: